Nathan Rogge, President and CEO of Bank of Southern California said, “We produced solid results for 2019 and continue to increase meaningful loan and deposit relationships while maintaining strong credit quality across our portfolio. Specifically, we reported strong commercial and industrial loan growth, increased non-interest bearing DDA, and a rise in total assets, largely attributed to our recent capital raise.”  The Banks’ focus on C&I lending is not only reflected in a 14% increase in outstanding C&I loans during the year, but also in undisbursed C&I commitments, which increased 46% during the year.  Non-interest bearing demand deposits, increased 22% during 2019, a result of our emphasis on relationship-based banking.

“As we enter 2020, we remain focused on advancing and driving growth in the Southern California market. Our strategic merger with CalWest Bank will provide us with an expanded branch presence covering Orange County and the Inland Empire as well as operational synergies and efficiencies, thus allowing us to better serve the business community. The merger is anticipated to close in the second quarter of 2020,” concluded Rogge.

John Farkash, Chairman of the Board said, “We are pleased to report another solid quarter to close out 2019. The Bank has achieved good momentum in executing our strategy and moving towards a relationship-focused approach to banking. As we look ahead, we remain focused on driving long-term value for our customers and shareholders.”

Forward-looking statements can be identified by the fact that they do not relate strictly to historical or current facts. They often include the words “believe,” “expect,” “anticipate,” “intend,” “plan,” “estimate,” or words of similar meaning, or future or conditional verbs such as “will,” “would,” “should,” “could,” or “may.”  Forward-looking statements are not guarantees of future performance, nor should they be relied upon as representing management’s views as of any subsequent date. Future events are difficult to predict.  Forward-looking statements involve significant risks and uncertainties and actual results may differ materially from those presented, either expressed or implied, in this news release. Factors that might cause such differences include, but are not limited to: the ability of the Bank to successfully execute its business plan; changes in interest rates and interest rate relationships; changes in demand for products and services; the degree of competition by traditional and non-traditional competitors; changes in banking legislation or regulation; changes in tax laws; changes in prices, levies and assessments; the impact of technological advances; the outcomes of contingencies; trends in customer behavior as well as their ability to repay loans; and changes in the national and local economy. 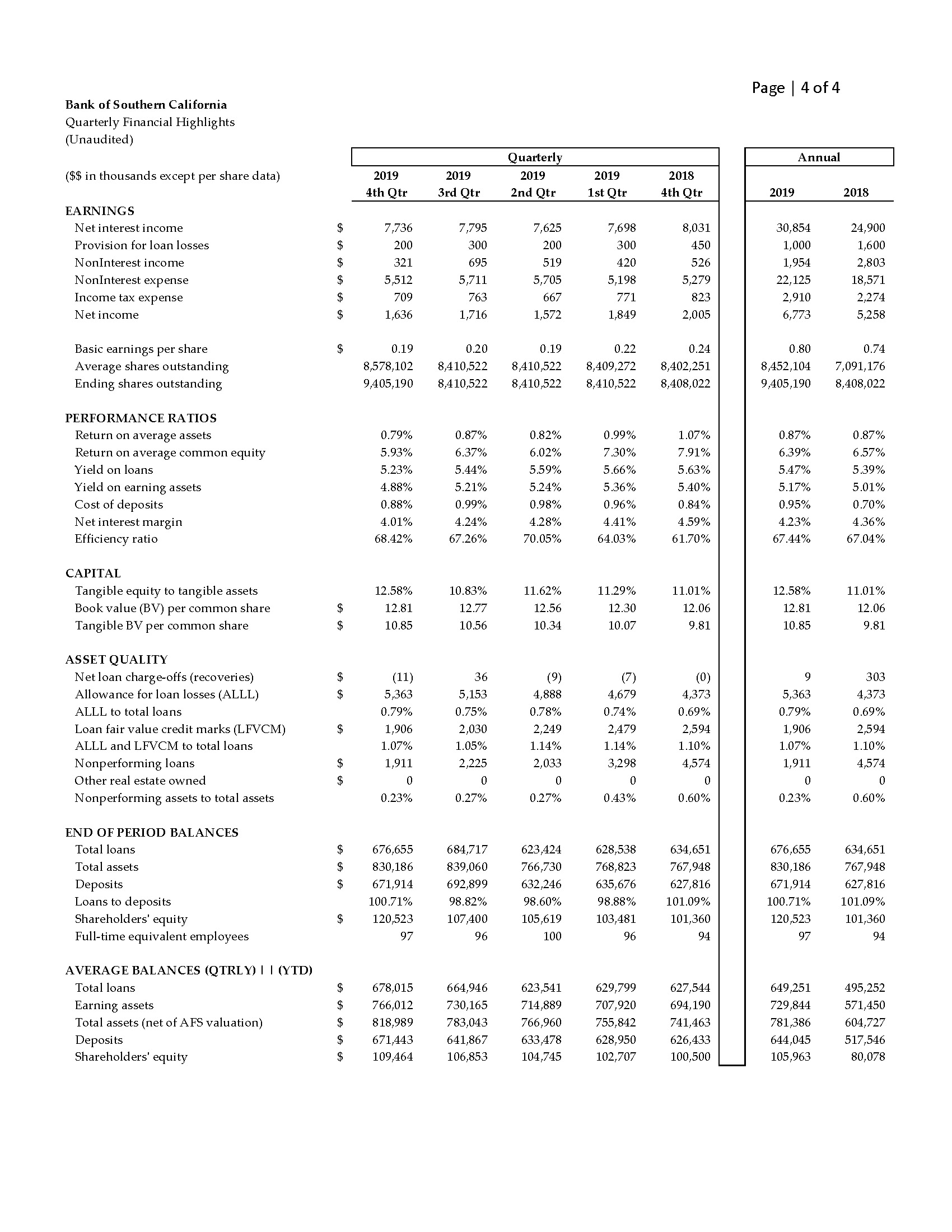