“I’m honored to have our Board’s confidence and excited to be leading the Company as we continue to execute on the strategic growth plan presented to investors during last year’s capital raise,” said David Rainer, Chairman, President and Chief Executive Officer of Southern California Bancorp and Bank of Southern California. “We have made significant progress on that plan, including the opening of three banking offices in West Los Angeles, Encino and Westlake Village, all of which are key locations for commercial banking. In the second quarter we also announced the acquisition of Bank of Santa Clarita, which has a commercial banking business model very complementary to ours and is in the attractive banking community of northern Los Angeles County; we have received regulatory approval and expect that transaction to close in the fourth quarter, pending shareholder approval. Additionally, we have arranged for the sale of three branches that are not in alignment with our commercial business banking focus and that transaction is expected to close in the third quarter. Our execution on all these initiatives places us in an excellent position for continued growth, especially given the recovering economy.

“I’m pleased to report the Bank achieved net organic non-PPP loan growth of $37 million in the second quarter, despite the headwinds of payoffs and paydowns of $70 million, and that loan credit quality remains pristine, with the ratio of nonperforming assets to total assets ending the quarter at 0.04%.

“Second quarter net income of $2.4 million was impacted by nonrecurring compensation expenses but was significantly improved from $1.4 million in the first quarter. Quarterly net interest income of $15.4 million, which benefitted from $3.2 million in fee income related to the accelerated forgiveness on PPP loans, was a major driver of the increase. Net income also benefitted from the $920,000 gain on sale of a nonaccrual loan.

“Our employees worked diligently through two rounds of PPP loan originations totaling nearly $800 million to provide timely economic relief to businesses in our local community during the pandemic. These loans were made to both current and new customers, and we have been focused, with much success, on converting those new customers to ongoing banking relationships. Of the total PPP loans originated, at the end of the second quarter we had submitted 61% for forgiveness and received payoffs for 57%, reducing the Bank’s PPP outstanding loan balance to $347 million at June 30, 2021. The acceleration of PPP loan forgiveness has increased cash on our balance sheet, which will be deployed to fund new loans, and over time make additions to our investment portfolio, with some cash reduction related to the planned sale of three Bank branches later this year.”

Net income for the second quarter of 2021 was $2.4 million or $0.17 per fully diluted share, compared with net income of $2.6 million or $0.27 per fully diluted share for the second quarter of 2020. The decrease in net income from the prior year was largely due to a $9.0 million increase in total noninterest expenses, primarily related to the acquisition of CalWest and the Company’s recent strategic expansion into Los Angeles County, as well as $3.1 million in nonrecurring compensation expenses related to a preexisting employment contract. This increase in noninterest expenses was partially offset by a $4.0 million increase in net interest income, a reduction of $2.2 million in the provision for loan losses and an increase of $1.4 million in noninterest income.

Net interest income for the second quarter of 2021 was $15.4 million, an increase of $4.0 million or 35% from the second quarter of 2020. The increase was primarily due to an increase in average earning assets from the acquisition of CalWest, the Company’s expansion into Los Angeles County and increased PPP fee income due to the accelerated pace of PPP loan forgiveness. Comparisons to the prior year also benefit from a reduction in interest expense of $450,000 resulting in cost of funding decreasing to 0.22% from 0.46% in the prior year.

Cost of funding for the second quarter of 2021 was 0.22%, down from 0.28% in the previous quarter. A detailed comparison of interest income, yields, costs, and net interest income is included in the table below:

Total noninterest income in the second quarter of 2021 increased by $1.2 million compared with the first quarter of 2021, primarily due to the gain on sale of an acquired loan noted above, and a $197,000 increase in income on bank owned life insurance.

The Company recorded no loan loss provision in the first and second quarters of 2021, after recording $4.6 million in provisions for the full year of 2020, and the allowance for loan and lease losses (ALLL) remained at $10.3 million at the end of the second quarter of 2021. The Company continues to monitor macroeconomic variables related to COVID-19 and believes it is adequately provisioned for the current environment. Management will continue to monitor and manage the loan portfolio to minimize potential future losses.

As the initial onset of economic uncertainty became clearer, many customers who elected a payment deferral have been returned to paying status; a total of $183 million in loans have reinstated their normal loan payments. The remaining three loans currently on deferral total $2.9 million and include two health care loans and one real estate loan.

Relevant reserve ratios compared to the prior and year-ago quarter are as follows:

With 7.4% growth in total deposits in the second quarter, and a strong cash balance from the quick pace of forgiveness of PPP loans, the Bank has ample liquidity resources to meet its customers’ needs. Additionally, the Bank has borrowing capacity of $187 million from the FHLB, with no outstanding borrowings at June 30, 2021.

The significant growth in PPP loans over the past 18 months has been funded through a combination of increased DDA accounts, generally associated directly with the PPP Loans, borrowings under PPPLF, and other sources. At June 30, 2021, the Bank’s PPP loan portfolio was entirely funded by Bank deposits.

PPP loans are considered zero risk-weighted assets, and as such have helped maintain the Bank’s leverage capital ratio and total risk-based capital ratio at 9.74% and 17.45%, respectively, for the quarter ended June 30, 2021.

This news release may include forward-looking statements within the meaning of Section 27A of the Securities Act of 1933, as amended, and Section 21E of the Exchange Act of 1934, as amended, and Southern California Bancorp (the “Company”) intends for such forward-looking statements to be covered by the safe harbor provisions for forward-looking statements contained in the Private Securities Litigation Reform Act of 1995. Future events are difficult to predict, and the expectations described above are necessarily subject to risk and uncertainty that may cause actual results to differ materially and adversely. Forward-looking statements can be identified by the fact that they do not relate strictly to historical or current facts. They often include the words “believe,” “expect,” “anticipate,” “intend,” “plan,” “estimate,” or words of similar meaning, or future or conditional verbs such as “will,” “would,” “should,” “could,” or “may.” These forward-looking statements are not guarantees of future performance, nor should they be relied upon as representing management’s views as of any subsequent date. Forward-looking statements involve significant risks and uncertainties and actual results may differ materially from those presented, either expressed or implied, in this news release. Factors that might cause such differences include, but are not limited to: the effects of the COVID-19 pandemic, or other similar outbreaks, including the effects of the steps being taken to address the pandemic and their impact on the Company’s markets, customers and employees; the ability of the Company to successfully execute its business plans and achieve its objectives, including consummating the sale of three branches and consummating the merger with Bank of Santa Clarita, and including achieving the expected revenue synergies and cost savings from the merger with Bank of Santa Clarita; changes in general economic and financial market conditions, either nationally or locally, in areas in which the Company conducts its operations; changes in interest rates; continuing consolidation in the financial services industry; new litigation or changes in existing litigation; increased competitive challenges and expanding product and pricing pressures among financial institutions; legislation or regulatory changes which adversely affect the Company’s operations or business; loss of key personnel; and changes in accounting policies or procedures as may be required by the Financial Accounting Standards Board or other regulatory agencies.

The Company undertakes no obligation to publicly revise these forward-looking statements to reflect subsequent events or circumstances. 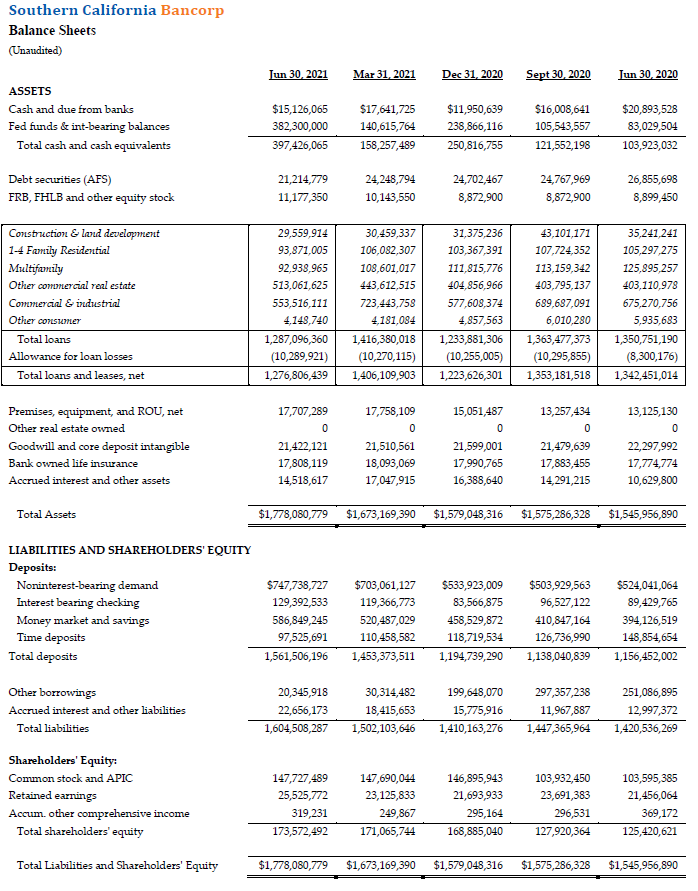 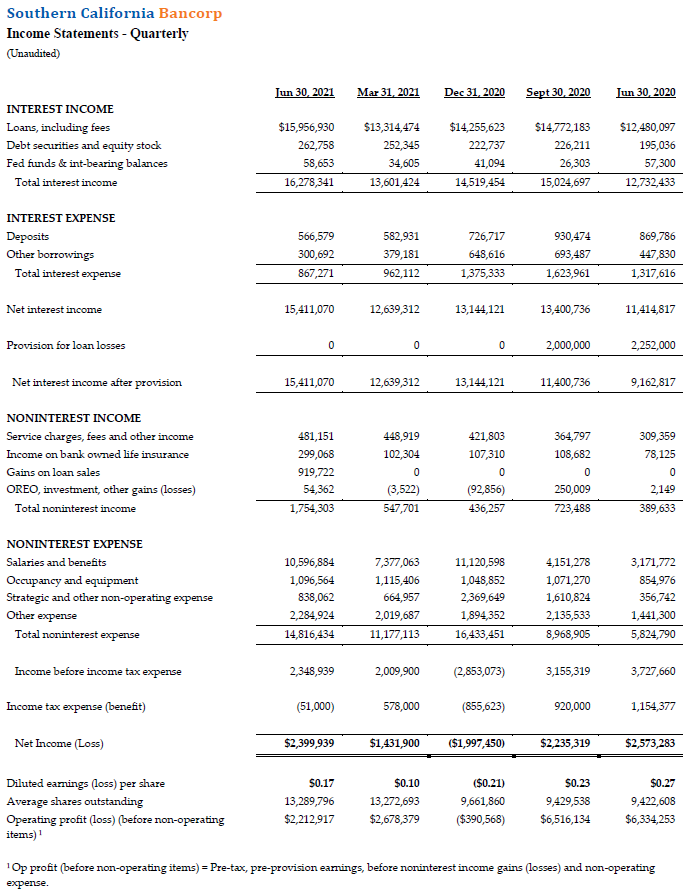 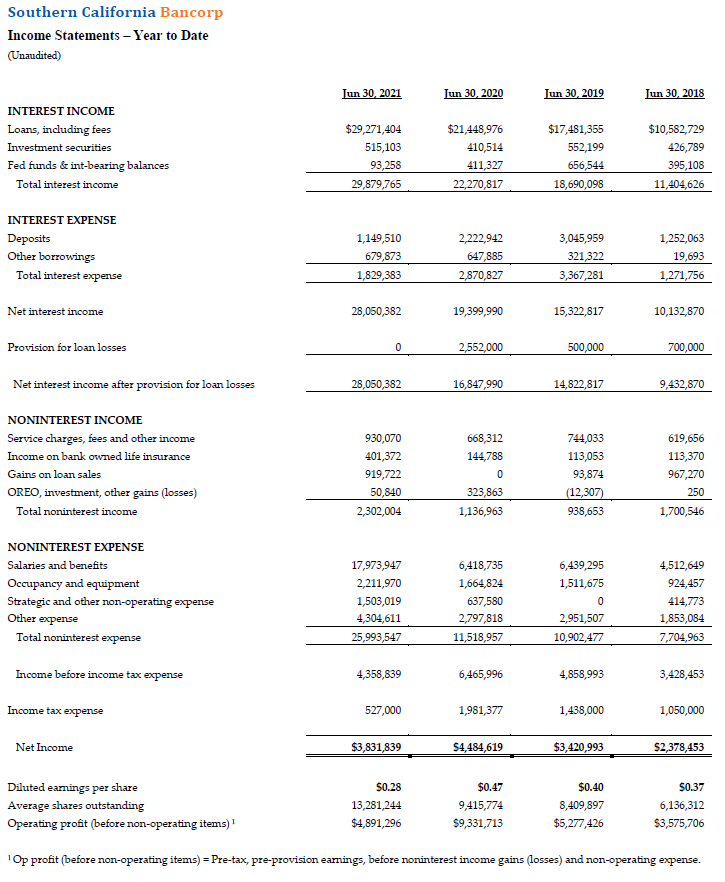 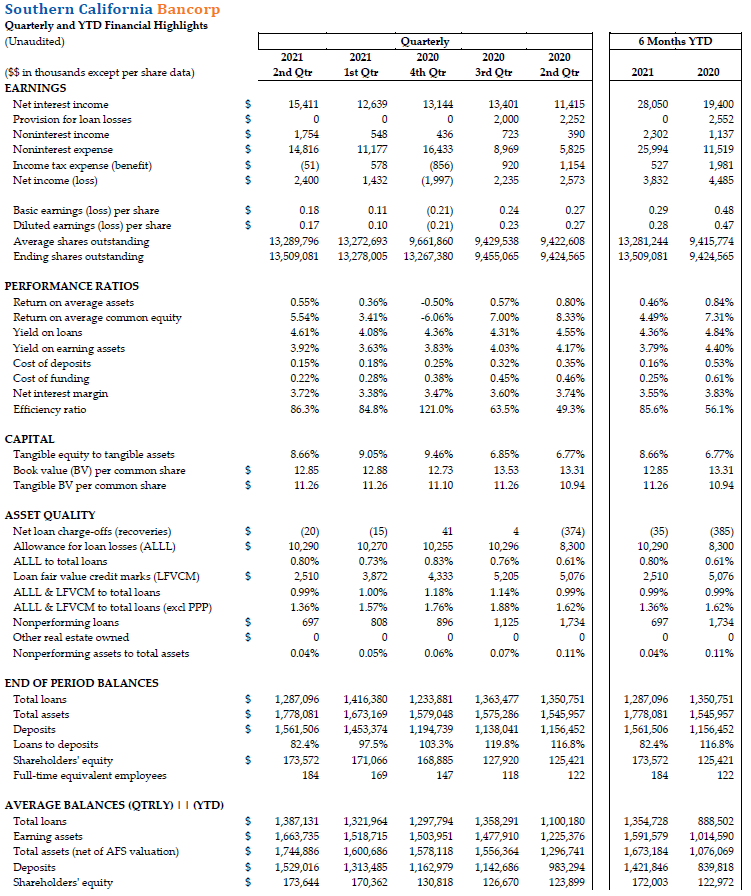