Commenting on the recently completed acquisition of Americas United Bank, Nathan Rogge, President and CEO of Bank of Southern California said, “We are pleased to welcome Americas United Bank customers, employees, and shareholders to Bank of Southern California. We look forward to capitalizing on our newly expanded footprint and realizing greater efficiencies for the benefit of our shareholders, customers and the communities we serve.”

“In addition to leveraging Americas United Bank’s talented employees, we also hired several tenured and experienced commercial bankers to further expand on the small business opportunities in the market. We are well positioned to meet the needs of the Southern California business community and look forward to continued growth and success,” concluded Rogge.

For more details about our quarterly results, please visit the “About Us” / “Financials” page of our website and follow the link labeled: Quarterly Results and Trends

Forward-looking statements can be identified by the fact that they do not relate strictly to historical or current facts. They often include the words “believe,” “expect,” “anticipate,” “intend,” “plan,” “estimate,” or words of similar meaning, or future or conditional verbs such as “will,” “would,” “should,” “could,” or “may.” Forward-looking statements are not guarantees of future performance, nor should they be relied upon as representing management’s views as of any subsequent date. Future events are difficult to predict. Forward-looking statements involve significant risks and uncertainties and actual results may differ materially from those presented, either expressed or implied, in this news release. Factors that might cause such differences include, but are not limited to: the ability of the Bank to successfully execute its business plan; changes in interest rates and interest rate relationships; changes in demand for products and services; the degree of competition by traditional and non-traditional competitors; changes in banking legislation or regulation; changes in tax laws; changes in prices, levies and assessments; the impact of technological advances; the outcomes of contingencies; trends in customer behavior as well as their ability to repay loans; and changes in the national and local economy. 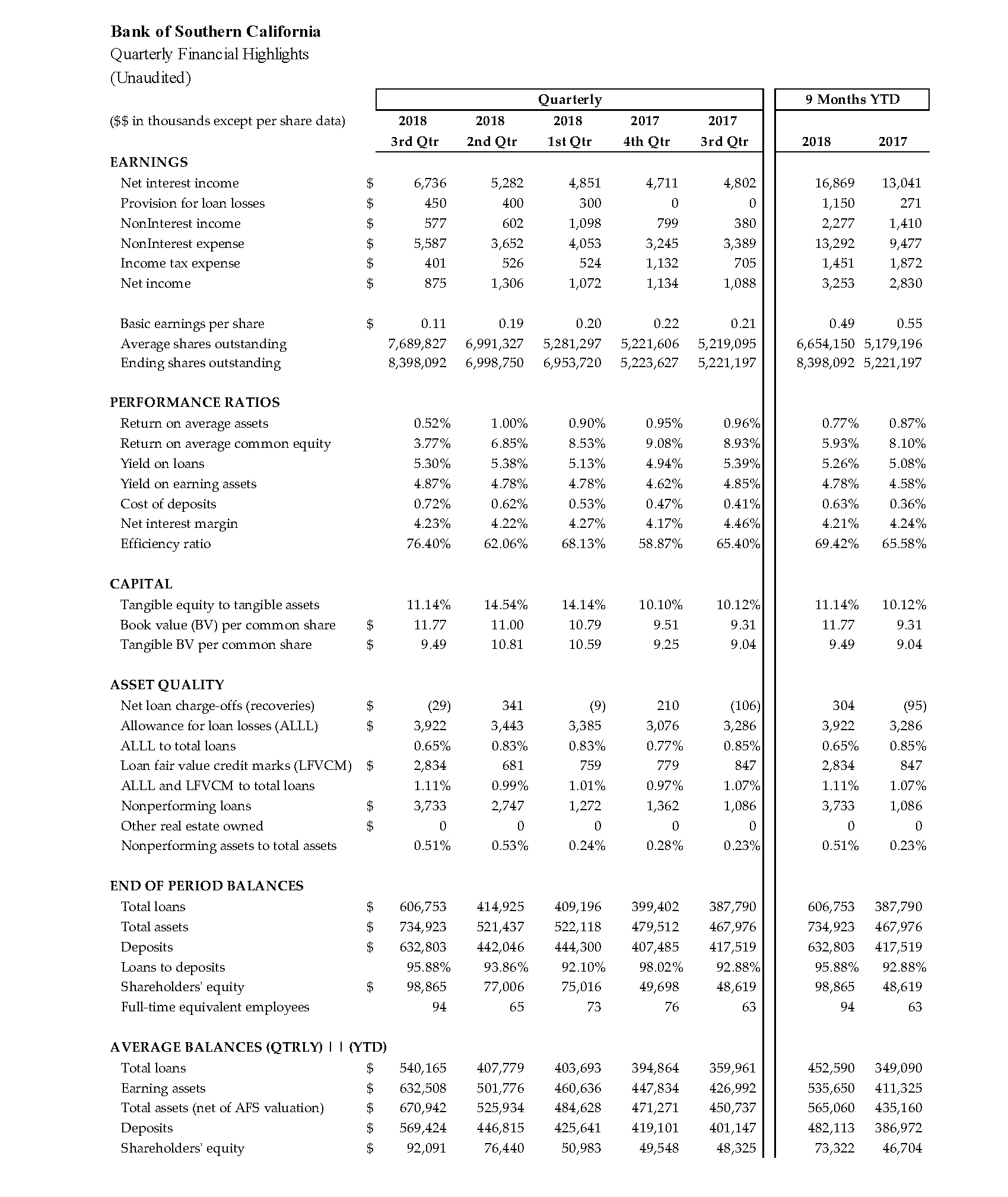 You are now entering a third-party website that is not operated by Bank of Southern California, N.A. Bank of Southern California does not hold responsibility for the content at this site. Click "OK" to continue or "Cancel" to go back.
OK Cancel
You are using an outdated version of your internet browser. If possible, please upgrade your browser before viewing this site for the best viewing experience. If you continue to see any issues please email us at info@banksocal.com. Thank you!
I understand