San Diego, Calif., May 2, 2018 – Bank of Southern California, N.A. (OTC Pink: BCAL) announced quarterly earnings of $1,072,303 for the first quarter of 2018, a 51% increase compared to $710,022 for the first quarter of 2017. Results for the quarter ended March 31, 2018 and include approximately $320 thousand in expenses related to the pending acquisition of Americas United Bank (OTC Pink: AUNB). As previously announced, the Bank also completed a private placement offering of common stock of approximately $26 million during March 2018.

“Building from the successes of 2017, Bank of Southern California had a strong start to 2018. Our loans and deposits grew 17% and 16%, respectively, compared to the first quarter of 2017, while net interest income grew 24%. In the first quarter, the Bank was also recognized as a top SBA 7(a) lender by the San Diego District Office of the Small Business Loan Administration and was awarded a Super Premier Performing Bank status by The Findley Reports,” commented Nathan Rogge, President and CEO of Bank of Southern California.

“I am delighted that we continued to organically grow our loan and deposit portfolios in San Diego County, the Coachella Valley, and Orange County in the first quarter, when much of our energy was focused on planning for the acquisition of Americas United Bank (AUNB), as well as successfully completing a $26 million capital offering,” concluded Rogge.

Forward looking statements can be identified by the fact that they do not relate strictly to historical or current facts. They often include the words “believe’, “expect”, “anticipate”, “intend”, “plan”, “estimate”, or words of similar meaning, or future or conditional verbs such as “will”, “would”, “should”, “could”, or “may”. Forward-looking statements are not guarantees of future performance, nor should they be relied upon as representing management’s views as of any subsequent date. Future events are difficult to predict. Forward-looking statements involve significant risks and uncertainties, and actual results may differ materially from those presented, either expressed or implied, in this news release. Factors that might cause such differences include, but are not limited to: the ability of the Bank to successfully execute its business plan; changes in interest rates and interest rate relationships; changes in demand for products and services; the degree of competition by traditional and non-traditional competitors; changes in banking legislation or regulation; changes in tax laws; changes in prices, levies, and assessments; the impact of technological advances; the outcomes of contingencies; trends in customer behavior as well as their ability to repay loans; and changes in the national and local economy.

For more details about our quarterly results, please visit the “About Us” / “Financials” page of our website and follow the link labeled: Quarterly Results and Trends 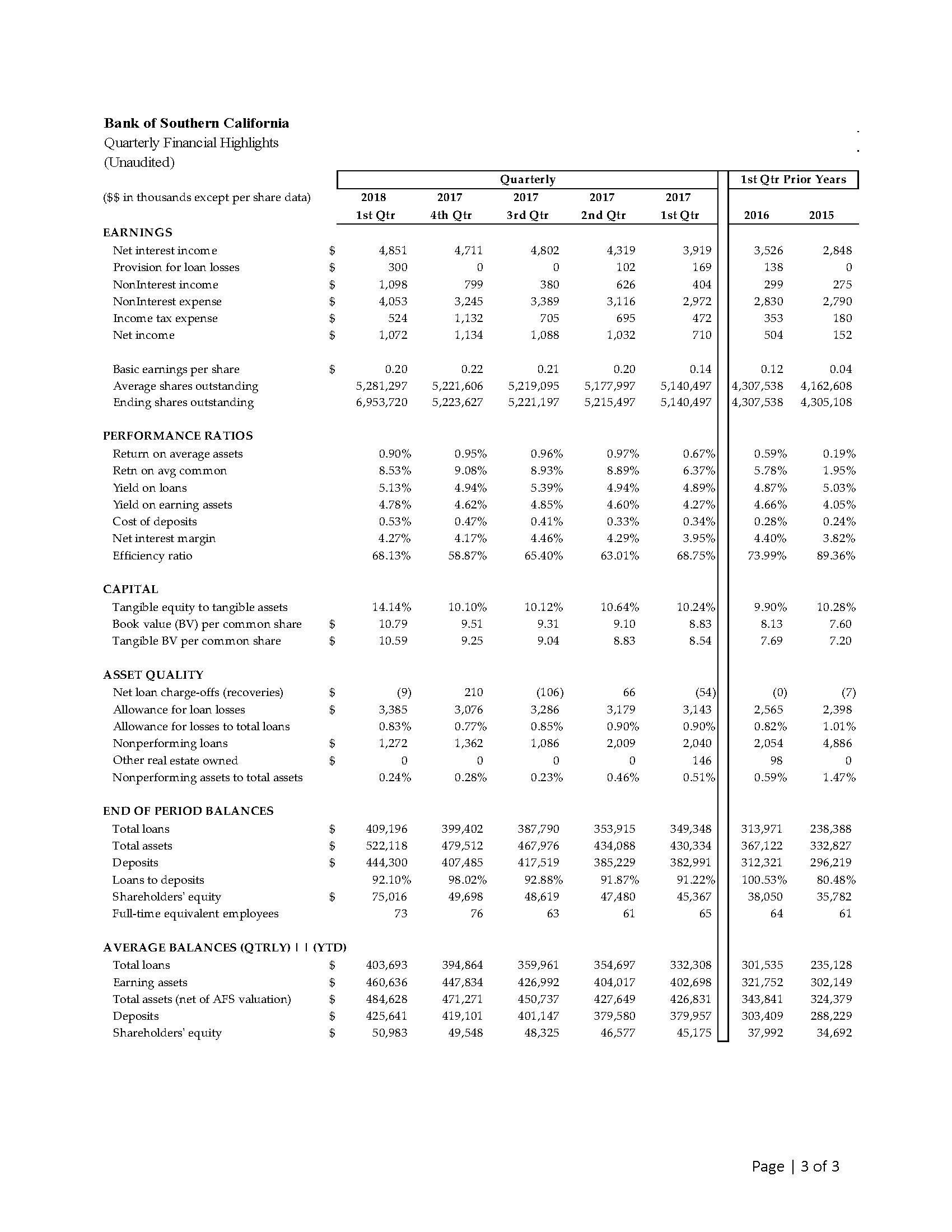